KEEN At Work With EED

The Kern Entrepreneurial Engineering Network (KEEN) was founded to increase entrepreneurial-minded learning in college students. The KEEN network is a group of colleges and universities around the country who receive funding from KEEN to meet these entrepreneurial learning objectives. The Department of Engineering Education (EED) became a KEEN partner in Autumn 2017. Last year, we used KEEN’s funding to rethink and rework our introductory courses.

In autumn 2018, EED started piloting a new program with KEEN to improve ENGR 1182 - a design project course. Curriculum development involved five months of summer workshops prior to piloting the program to discuss what should be in the course and how to align it with KEEN’s objective of creating value. The pilot program included three class sections of ENGR and was expanded in the following semester. In Spring 2019, half of the sections continued the traditional design with AEVs, while the other half followed the new KEEN design that involved AEVs as part of the project. The traditional method assigned students a specific task and gave them eight weeks to design/ build a solution followed by a few weeks of testing. The new method has students reach out to potential end users over the course of five weeks to define the problem.  The students then have five weeks to design/build the project, and five weeks to test the product. The goal was to permit students to define the problem themselves by talking to users and studying competition already on the market, rather than beginning by giving the students an objective. This method allows the students to better understand the potential value of their solution. We saw great improvement in professional skills gained by the students. Even though students had less time to design and build, the new method prepared students better and resulted in higher success.

This autumn 2020, the curriculum was further refined in ENGR 1188 – the design/build transfer course that does not include graphics. ENGR 1188 had twenty-four students (six groups of four), versus the seventy-two in the larger class. Two mentors were recruited for the class, Tom Murnane and Dan Kimmet, both Ohio State alumni, who have strong engineering and business backgrounds. The mentors came in to check on the students’ projects on three separate occasions throughout the semester, then watched the final presentations at the end of the course. After defining the problem, the students constructed their designed solution as much as they could within the scope of the course. In the style of “Shark Tank”, the next step was for the students to present their idea to the mentors, who posed as an incubator company that would decide whether or not they wanted to fund the project’s continuation. This new method produced promising results and will be continued with a streamlined process based on the mentors’ feedback. 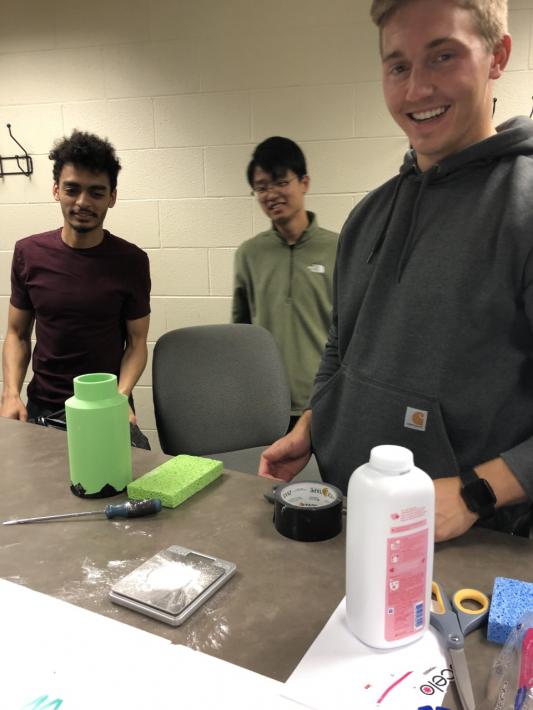