Sarabeth Hewa is a Mechanical Engineering major with a minor in Business in her second year at Ohio State from Rochester, NY. Sarabeth made a connection with Honda at last year’s ENGR 1182 Design Showcase which led to a one-day job shadow over the summer.  She had such a great experience and left a good impression that she has been offered an interview for a 2020 summer co-op position with the same group that she shadowed! We wanted to sit down with her to get some insights into her experiences.

What drew you to engineering at Ohio State? What inspired you to apply?

Sarabeth: Engineering at OSU has a lot of opportunities because they offer so many different majors and within the majors there are a lot of career paths you can go down. I was very indecisive entering my freshman year so I didn’t want to end up at a college with only one career path. I’ve switched my major two or three times already but I’m glad I did because you really have to take the courses to decide whether you like it or not. Most high schools don’t offer strong engineering courses so you really have to stay here, do the work, and figure out what you want.

OSU also has an amazing alumni network and that’s one of the reasons I got a co-op with Honda; if it wasn’t for OSU, I wouldn't have ever met an engineer at Honda or gotten an interview.

What was your experience working on the AEV project like?

S: It’s a project that every freshman engineer has to work on in the fundamentals coursework. It was really cool because you got a look into the software and hardware of what it’s like to be an engineer. You also had to look into the efficiency of your Advanced Energy Vehicle (AEV). Being able to figure out the center of gravity, or what code made it work better, or seeing if you needed to put a brake on it to make it work better really helped me see what it’s like to be an engineer in the real world, which makes students more interested to pursue the field.

You met a representative at Honda at the AEV showcase, correct? How did you get invited to the job shadowing opportunity there?

S: My professor told us before the AEV showcase that there were going to be engineers for Honda there. So I ended up just walking up to one of them and introducing myself to her. I found out later that the reason she offered me the job shadow - it was the first time they had ever really offered a student a job shadow - was because of the initiative I showed as a freshman with no experience just going up to an engineer and telling her how passionate I was.

Can you tell me more about your experience at Honda over the summer?

S: I think job shadowing is really important because each job is very different. I could be learning about physics and free-body diagrams but in a job, they’ll train you to their standards. When I was at Honda I could see how they wanted me to apply my knowledge. College gives you a broad knowledge of everything but the job you get after college is more specific. That’s how you can decide what you want to do.

Honda showed me that there are a lot of different ways that you can apply mechanical engineering so it’s more that just free-body diagrams, it’s really interesting work. It really opened my eyes because as a college student, they kind of jobs you get on campus aren’t always like what you’re going to be doing when you’re older.

How do you think the Department of Engineering Education’s (EED) coursework helped prepare you for your job shadowing and co-op experiences?

S: EED coursework definitely helped me more so than any of my other classes because in the fundamentals coursework you have to write memos, reports, executive summaries, you have to give presentations; honestly even though it’s only a two credit hour class, you still have so much to do and you have to stay on top of it. If I didn’t go through the Fundamentals of Engineering (FE) coursework, I don’t think I’d be able to write my resume or my cover letters as well, or have as good communication skills which is all really important for applying for a job or meeting with an employer.

Do you feel that EED has helped shape you into a better engineer? How so?

S: Definitely. I think having EED as a base experience as a freshman in college lets you step into your own shoes as an engineer. Everyone has their own perception of what an engineer is (someone who is good with numbers or likes science) but when you’re in the FE coursework, you’re able to put yourself into an engineer's shoes and with that you’re able to figure out what kind of engineer you are.

It also gives me drive and motivation to become an engineer. Engineering isn’t an easy major by any means; you have to take a lot of pre-requisites like chemistry and physics, which are pretty challenging, but with the FE coursework, it gives you motivation to reach that end goal of what you want to do as an engineer.

Are there any individuals in particular who helped you or who have made certain opportunities possible?

S: I would say that the biggest one for me was my UTA (Undergraduate Teaching Associate) in my spring semester freshman year  - so that’s the 1182 class where you work on Solid Works and the AEV project. His name was Div Satija and he was so passionate about everything. In my experience in class, TAs were there to help but you could tell Div really wanted to help us. He was always running around the classroom and helping students understand; he would always help me understand things that I didn’t get. Just seeing how passionate he was about engineering and how he was a sophomore in so many hard classes but he was always there to help us really made me want to become a UTA.

So now I’m a UTA for the department because of him and the reason I even spoke to the lady at Honda was because he told me that I should talk to people and make connections. He’s honestly been my biggest influence. I think having UTAs in the department and not just the professor or a GTA (Graduate Teaching Associate) who’s five or six years older than you is really important; just having someone who’s your age and is really passionate about it can really change your whole career path and even life. Without Div I wouldn’t have become a UTA and I want to be one now so I can make students feel the way he made me feel.

What would you say to a rising first year engineering student?

S: It’s going to be hard at first because we want to challenge you, I know I was challenged and at some points I felt like maybe this wasn’t for me just because of how hard it was but at the end of the day, the experience you get just being in this coursework and being a student in engineering at Ohio State is worth more than anything. You learn so much about the people around you and about yourself, you become more confident in your skills as an engineer with teamwork, resume building, and technical communication.

Don’t give up, it will get hard at times but remember why you’re here and what you want to do. Stay consistent with your work, try not to fall behind. It’s okay if you do, everyone fails, but people are here to help you - more people than you think. Your advisors, your UTAs, anyone; if you reach out for help they’ll be there for you.

If I had never talked to that engineer at Honda, I probably wouldn’t be a UTA, I wouldn’t have gotten the co-op, I wouldn't have been able to job shadow at Honda, and I wouldn’t be here with you right now telling you about my experience. You really have to be your biggest advocate and know how much work you’re willing to put into this. There’s so much work but it’s really worth it at the end of the day.

Sarabeth is also involved in Engineers Without Borders, a club that is partnered with a community in Njau, Gambia helping to  build sustainable structures. They are currently digging a borehole and building a well and a water tank for the community so they have a way to get water during the dry season and are able to better feed themselves. This will prevent them from having to walk up to 4 miles a day just to get clean water. She also volunteers at local elementary and middle schools with the club to work on engineering-minded crafts with younger kids to help them learn about engineering. She is also an Undergraduate Teaching Associate for the Fundamentals of Engineering 1181/1182 sequence.

This summer, Sarabeth will be working in the powertrain division at Honda in East Liberty, OH with senior engineers testing cars.

Photos Of Sarabeth And Her Team 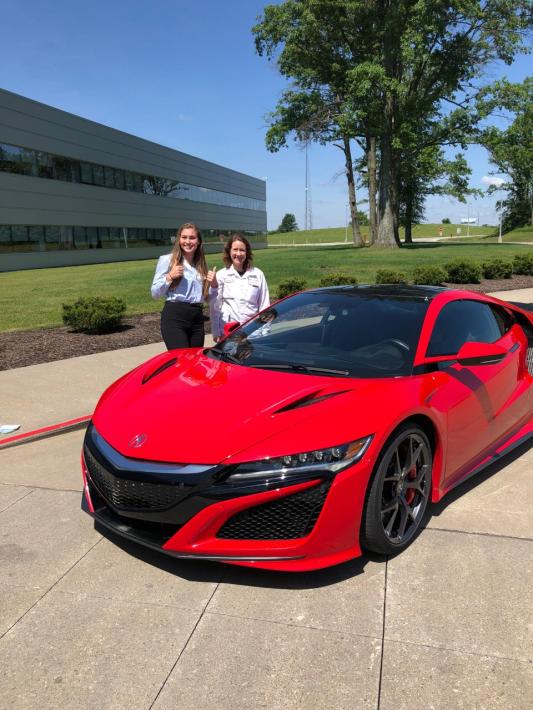 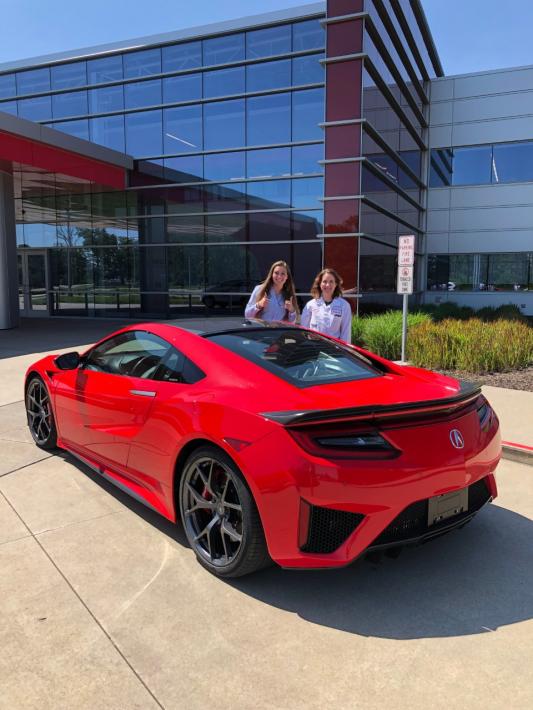 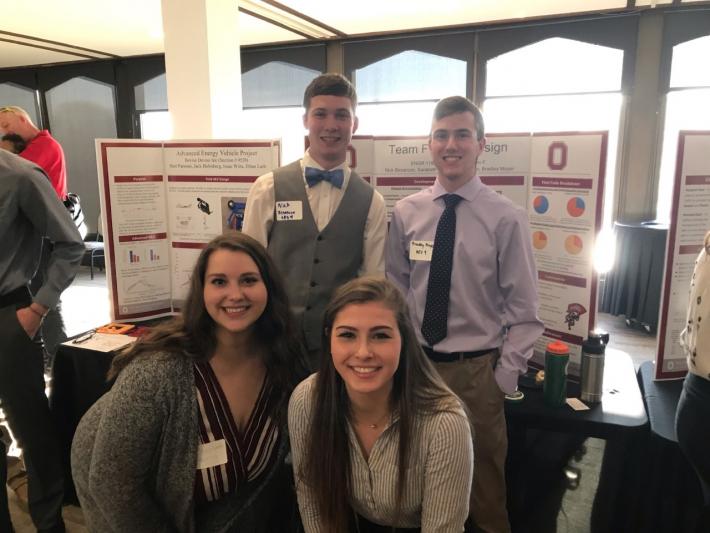 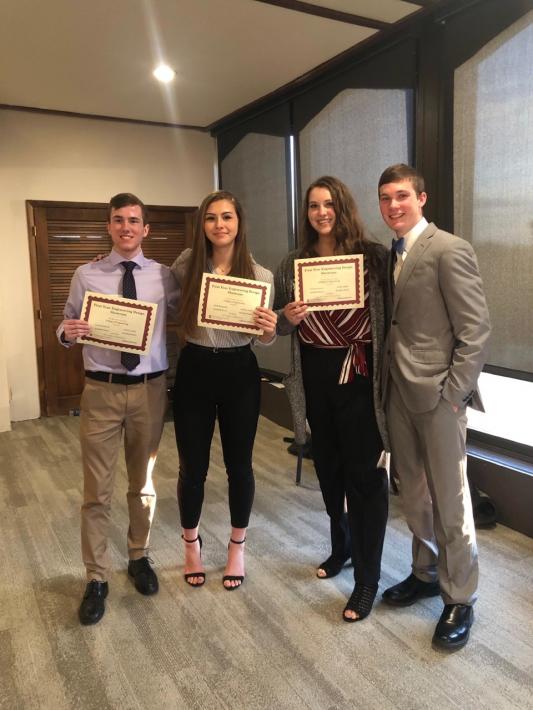